Last spring, manufacturers rallied to mass produce the critical care ventilators needed to treat patients with COVID- 19. But every ventilator must also be tested and validated before it is shipped—and testing equipment is unique to each brand of ventilator and must be custom-built.

Enter Velentium, a Houston-based engineering firm that specializes in designing and manufacturing automated test systems for medical devices. In mid-March, executives learned of “Project V,” a partnership between General Motors (GM) and Ventec Life Systems to produce ventilators at an idle GM facility in Kokomo, IN.

Velentium’s Dan Purvis (CEO) and Tim Carroll (president and COO) reached out to Ventec and offered to help. “Within two hours, I was headed to the airport for an 8 a.m. meeting the next day,” Purvis said. 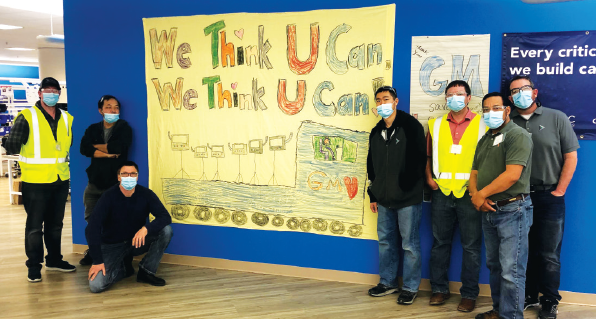 Velentium employees and contractors lived their company’s mission of “Changing Lives for a Better World” while working significant hours at GM’s Kokomo, IN, manufacturing plant.

The meeting would be held at Ventec’s headquarters in Bothell, WA, just nine miles from Seattle—where the first pandemic hotspot in the U.S. was raging. The task ahead was going to be nothing short of monumental.

Purvis spent the next day at Ventec looking for ways to double production of ventilators to 300 a month. But the following day, GM’s senior executives joined the group, and a lofty goal of 10,000 ventilators a month was set.

“It was a scaleup like I have never seen,” Purvis said. “I remember thinking, ‘Holy smoke, these people are not messing around.’”

Purvis and his team at Velentium quickly made calculations. It was obvious that the need for test systems at this new plant would be overwhelming, with 141 needed in less than a month.

“Let’s Figure Out a Way”

Back in Houston, Velentium moved at lightning speed. Within 96 hours, the 47-person company hired more than 60 contractors with project-based engineering, technical, purchasing, and receiving expertise, recruiting talent from industries crippled by the pandemic, including oil and gas.

Working 14- to 18-hour days for the next four to five weeks, this team scoured the globe for the 1,500 different parts needed for the test systems. 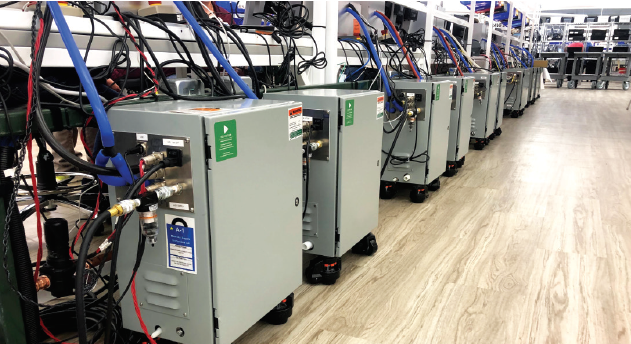 By the end of Project V, Velentium delivered 141 test systems to aid in the manufacturing of life-saving ventilators.

“Don’t take no for an answer” and “Let’s figure out a way” were the guiding principles. One supplier agreed to work all night to make a critical part and deliver it by 6 a.m. to avert cascading delays. When they lacked parts that a standard hardware store would have, Purvis convinced home improvement store Lowes to reopen after hours. Working with Ventec engineers, they came up with substitutes for any parts they could not source, designing and 3D-printing some of them.

Even Purvis’s personal trainer, Seth Dunn, was hired to fly around the country and pick up parts. When a connecting flight to Detroit was delayed, Delta met him when he landed, whisked him to his next plane, and put him in a first-class seat. As for the handoff the next morning from the supplier, Purvis told him, “As long as you get the parts to the front desk of the Courtyard by Marriott at John Wayne Airport by 6 a.m., Seth will pick up the suitcase you leave for him and he’ll get on the plane at 7:30 and it’ll be in my hands at 10.”

The team also forged relationships with delivery companies to shave time off of deliveries. Early on, the head of the local UPS distribution center made a delivery on a Sunday morning, surprised to find a working factory full of people. From then on, he had all Velentium packages loaded onto a dedicated truck that showed up by 7:30 every morning. 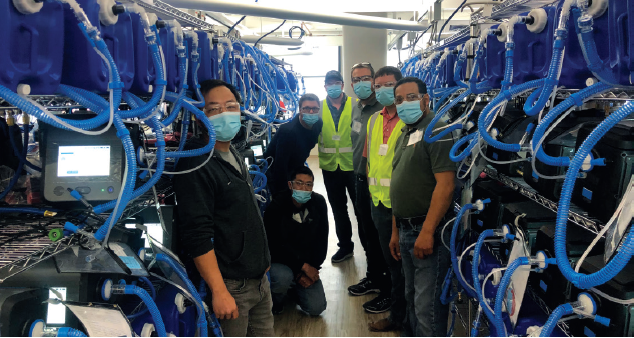 The Velentium team among ventilators being actively tested at the General Motors Kokomo plant.

Velentium, General Motors, and Ventec staff wrote messages of support on the first box of ventilators the factory shipped.

With this swift response, Velentium was able to ship the first test system to Kokomo within four days of receiving GM’s original purchase order. Within four weeks, the company delivered the initial 90 test systems to ensure that the newly manufactured ventilators met FDA-approved design standards. The first 600 ventilators were shipped within weeks after the project launched. By the end of August, 30,000 ventilators were expected to be ready for use.